Joining Pangolin V2’s First Liquidity Pools, TrueUSD Takes The Growth Of Avalanche To The Next Level

The cryptocurrency industry is changing rapidly. The new technology, which was once considered experimental and out of reach by some now plays an important role in the financial system. However, it is still a highly risky market with high volatility that can be difficult to parse for average users or institutional investors., 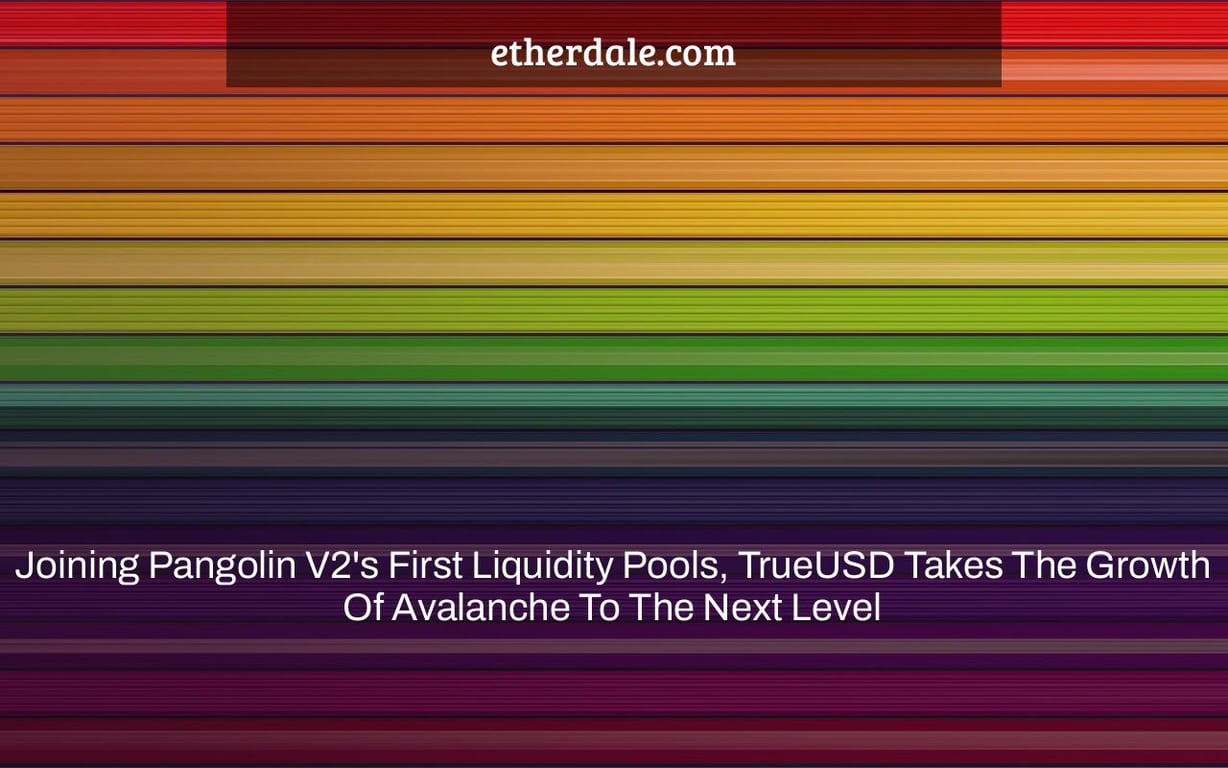 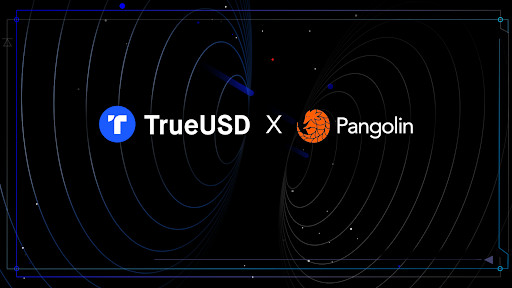 30 November 2021, Singapore, Singapore – The Avalanche protocol has reached a critical milestone in 2021: its on-chain DeFi TVL has surpassed $12 billion, a new high, and it has climbed to be a top-five public chain in terms of TVL. Pangolin, a leading decentralized trading platform in the Avalanche ecosystem, has played a key role in this success.

TrueUSD established the TUSD-AVAX liquidity pool on Pangolin, a decentralized trading platform, on November 22 as the first USD-pegged stablecoin native to the Avalanche protocol and a vital ecosystem partner. Users that provide liquidity to the pool will be rewarded with PNG. The APR of the TUSD-AVAX liquidity pool has been held at a massive 562 percent since TrueUSD landed on Pangolin V2, dwarfing all other stablecoin pools and giving TUSD investors with a lucrative return. 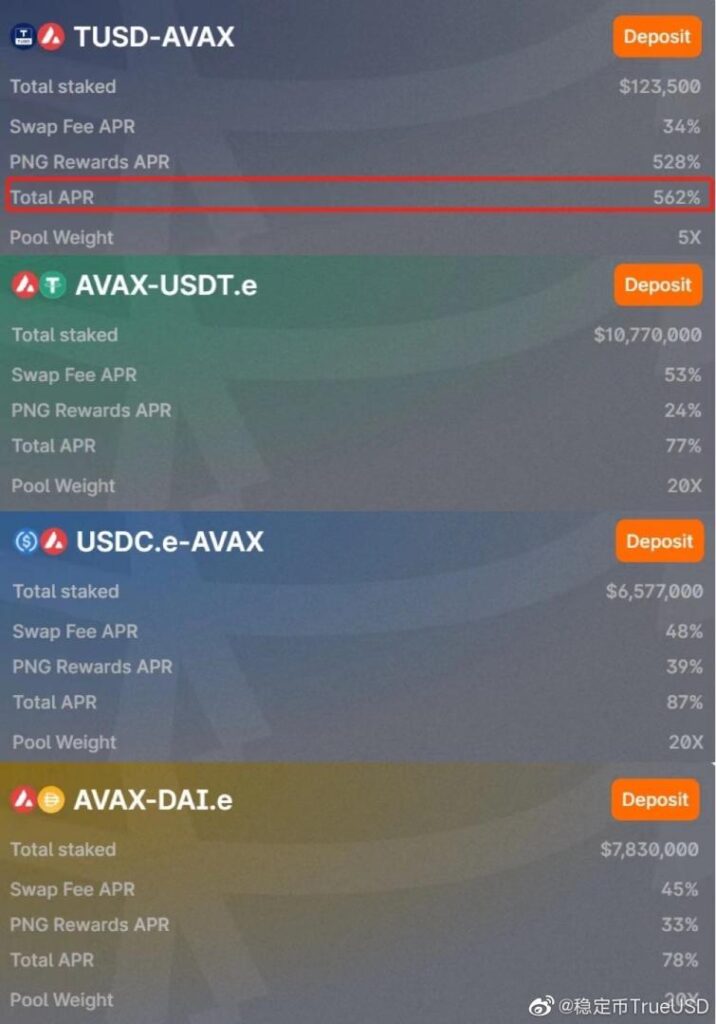 Users of Pangolin V2 may attest to the superiority of the product upgrade: Pangolin V2 has enhanced DEX settings and a simplified trading and LP experience. On November 21, the new smart contract was enabled on the Avalanche Mainnet. It’s also worth mentioning that Pangolin V2 liquidity suppliers will be rewarded more generously. Pangolin gave $4 million in PNG to liquidity providers within 30 days of the introduction of V2, in addition to the fixed daily mining rewards of 175 thousand PNG established in its economic model to support the new version while rewarding customers to shift their liquidity from V1 to V2. In addition, a new user interface is being developed to make the process of moving liquidity from V1 to V2 easier. 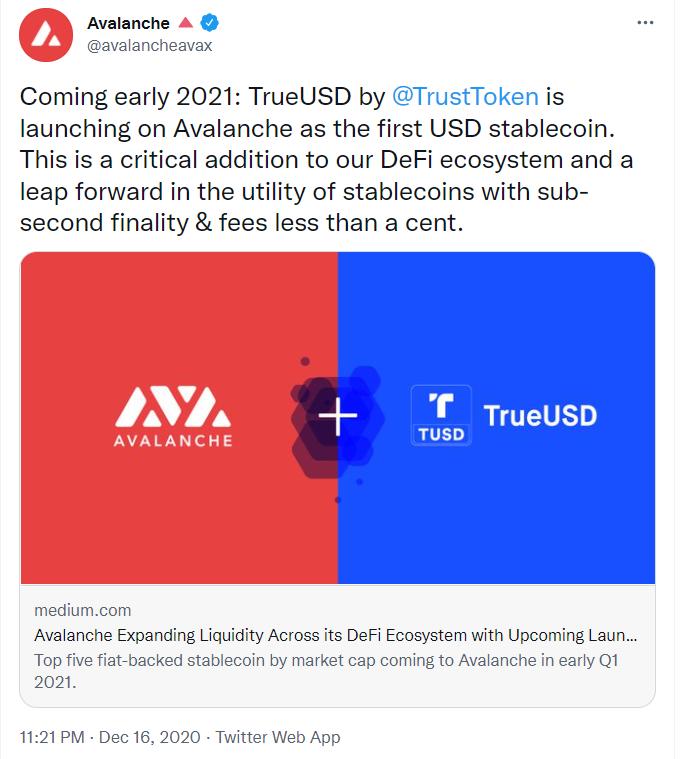 The announcement of Avalanche’s cooperation with TrueUSD

In October, TrueUSD, an early DeFi infrastructure startup, formally launched its Fountain Incentive Plan. By bringing TrueUSD and other digital currencies worth $1 billion to DeFi ecosystems, the initiative will give early projects with more liquidity. Avalanche Rush, the most major liquidity mining incentive program, was launched this year by the Avalanche Foundation, with AVAX prizes totaling $180 million earmarked to promote the all-around expansion of DeFi apps in the Avalanche ecosystem.

TrueUSD is expected to cooperate closely with Avalanche to utilize the synergy between stablecoins and DeFi ecosystems, with assistance from Fountain Incentive Plan and Avalanche Rush, and therefore push DeFi 2.0 to the next level, driven by the common aim of stimulating DeFi’s growth.

TrueUSD is the first digital currency backed 1:1 by the US dollar, with live on-chain attestations from independent third-party organizations. It has been listed on over 100 trading platforms so far, including Binance, Huobi, and Poloniex. It’s also live on well-known public chains like TRON, Avalanche, BSC, and HECO, giving them access to a large amount of liquidity to help them expand their DeFi ecosystem. Armanino, one of the major US-based accounting firms, audits it in real time to assure a 1:1 ratio of USD reserves to circulating token supply and a 100% collateral rate. Users may check the publicly accessible audit findings at any time via the official website.

Visit our website at https://trueusd.com/ to get in touch with us.

DEXs are a hot topic in the world of cryptocurrency, and this is not only because they offer users an opportunity to trade directly...
Read more
Previous articleEl Salvador is building a $1 billion Bitcoin City as pressure on Bukele ramps up
Next articleNFT partnerships and protocol integrations boost Tezos, WAX and Aleph.im

Crypto-currency exchange Binance burned its own BNB token worth more than $594 million today, the largest burn in the exchange’s history. But it wasn’t about...
Read more

South Korean officials are in talks to delay the passage of a cryptocurrency tax bill scheduled for later this year, according to a report...
Read more

The cryptocurrency market has been fluctuating the past few weeks, with Bitcoin reaching an all-time high on Nov. 8th and cryptocurrencies hitting a low...
Read more

Connecting Polygon To The Multi-Chain World Via Hop Protocol With 200,000$ In Liquidity Rewards

The Ethereum protocol has gained massive notoriety during the past couple of years, as a platform for executing smart contracts. The fact that it’s...
Read more

How Does Crypto Investing Differ From Other Asset Classes?

Crypto investing is becoming increasingly important as financial institutions invest millions of dollars in the technology. Bitcoin and other cryptocurrencies have grown in popularity...
Read more

As of May 2018, staking has reached 5% of the total supply of crypto. This is a major milestone for the blockchain industry as...
Read more

More than 10% of BTC supply has moved, while bitcoin’s market capitalization has risen since March 26. to more than $1 trillion, indicating strong...
Read more

In the last 24 hours, we have seen the price of Chainlink climb again, testing the $41 resistance level for the second time in...
Read more

Betting on bitcoin call options at $80,000 in June doesn’t seem out of place given BTC’s rise in recent weeks. BTC peaked a few...
Read more

Short positions worth about $150 million were liquidated within hours of bitcoin’s (BTC) price drop on the 26th. April went from about $47,000 to...
Read more

A Complete Breakdown Of Crypto wallet For Android Devices!

1. Download and install the Bitcoin Wallet (of your choice) app on your phone. 2. For the first time, create a new account, giving...
Read more